Today's post is from Carole.  Her tattoos are AMAZING and I am very jealous.  As she tells the story of her tattoos, have a look a the picture of the tattoo that incorporates her daughters name.  Just WOW!!  Carole is an chaotic ex-pat, currently living in Japan but is hoping to move back to Europe in the near future.  She blogs about her time in Japan over at Japanory and also works for the Fairies by running their personalised gift shop website called Dear Fairies.  She is also available for freelance writing work.  Over to Carole...
* * *
I like tattoos. No, scrap that. I LOVE tattoos.
My fascination with skin art started many years before they became so commonplace that every man, woman and dog has one. Nowadays it seems non-tattooed people are rarer than the decorated. 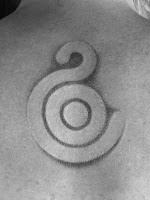 I resisted the urge to get tattooed until I turned thirty. Choosing the perfect indelible design for me took a long time. Finally a particularly nasty boyfriend, whom I had trouble getting rid of, said he’d leave me if I got a tattoo. So I promptly booked my appointment with a local studio in south London and waved the vicious boyfriend off.
My first tattoo was a peacock on my left shoulder blade. I was inordinately proud of it and showed it off as often as I could.
There’s a saying that once you’ve got your first tattoo, you will get more.
Some years later I went to Hong Kong on a business trip. Fuelled by alcohol and a defiant need to shock my strait-laced colleagues, I got my second tattoo. We visited a famous but rather seedy parlour late one night. While my friends looked at the pictures on the walls, I plonked myself down and had my Chinese star sign inked onto my ankle. That one hurt like hell due to it being on a bone. But it was worth it just to see my friends’ faces. Frankly, a pretty poor reason to get a tattoo!
Number three was created in Thailand. This was a completely different experience. For a start, no rebelliousness was involved. It produced my favourite piece of all. I followed customer recommendations rather than picking a random studio. The artist interviewed me first before allowing me to make an appointment. At the appointment, he just drew a design directly onto my arm, I made some changes and off he drilled for about three hours.
The bug (and ink) was well and truly in my system now.
But life intervened. I had a baby, and my beloved Dad died. 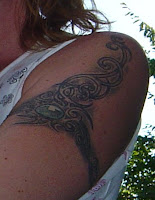 My head was all over the place and some madness prompted me get a tattoo on my other arm. I designed it myself and it included a lot of personal symbolism. Unfortunately, the tattooist was no artist. The outline was just about OK but I should never have asked him to colour it in. It was a disaster and for the first time I regretted my tat. Do not get a tattoo when you are grieving.
Then my husband got a job transfer to Japan. The home of beautiful tattooing! But also a country with the greatest taboos about skin art.
Before we left the UK, I found another tattooist for ink number five - a colourful compass on my right foot meaning “a step in the right direction”. But I wouldn’t recommend enclosing foot tattoos in shoes and socks while packing up your entire house. It got badly infected and I ended up taking strong antibiotics for a while.
Once in Japan I quickly discovered my decorated skin was not appreciated. One man verbally attacked me about the Chinese writing on my ankle. He seemed satisfied that I knew its meaning. I’m also not allowed into public swimming pools or gyms. I can live with that. What does sadden me is that I am not allowed to go into onsen, the natural hot spring pools that Japan is famous for. Tattoos here are a sign of the Yakuza, organised gangs. It makes no difference that I am a Caucasian female; tattoos are “bad”.
However, there are plenty of tattooists around. I’ve found a fantastic, gifted artist who entertains me with intellectual discussions and wonderful artistry. Yes, I’ve had more work done… 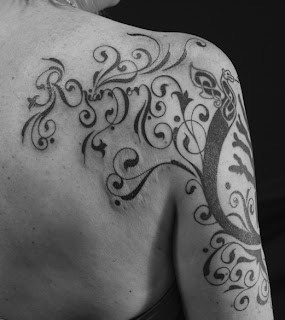 He spent a total of about ten hours blacking in my disastrous tattoo and adding decorations to it so I’m no longer ashamed of it. I also broke the golden rule of skin art - “do not have a name tattooed on you”. But as it’s my daughter’s name I will never regret it. Finally, he’s done another piece of strong symbolic significance to me, a spiral at the base of my neck.
Am I finished at seven tattoos? Of course not! I’ve just booked another appointment with him to have another piece done. The only difficulty now is deciding where to place it.
All images are © Carole Hallett Mobbs and are reproduced with kind permission
guest post holiday guest post tattoo