Jack Straw is my NBF

Me:  Really...? (I was only half listening)
* * * 5 minutes later * * *
*knock knock*
Member of the Labour Party:  Good evening (blah blah blah)... can we rely on your vote in the election?
I shall not bore you with the details of our conversation but it involved me explaining that if Mr Straw couldn't be arsed canvassing himself then I would be keeping my voting preferences to myself.
* * * 2 minutes later * * *
Me:  Kev, did Jack Straw just walk past our window?
Kev:  Dunno... erm... it looked a bit like him...
I opened the front door to see Mr Straw stood on the corner of our street.  I waved him over and proceeded to have a lovely chat with him about his involvement in the local area (he is a very prolific M.P., often at his office and has only missed one surgery session).  After about 10-15 minutes we were winding up our conversation and I said

"No-one outside of Blackburn is going to believe this happened.  Would you mind having your photo taken with me?" 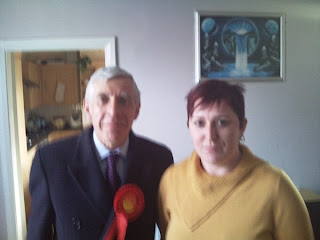 (excuse the quality of the photo... Kev took it)
So, I thought that was that.  Mr Straw excused himself (I couldn't convince him to join me at my dance class at 7pm.  Pity) and went on with his local canvassing.
A little later, I was discussing how dolphins are just gay sharks reviewing the latest episode of Glee on Twitter and noticed an update from Sarah Brown.  I sent her the following tweet about me and my new best friend... 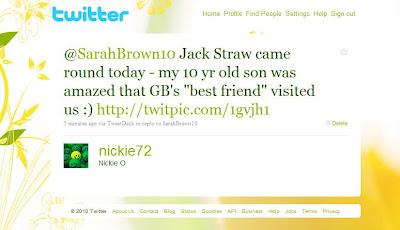 ... and then three minutes later, I received this reply... 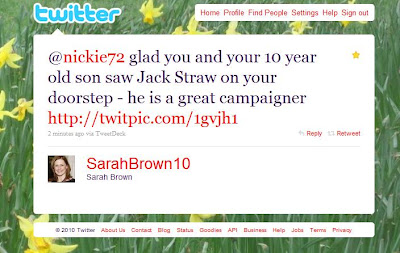 Good service from all sides.  That's all I'm saying.
The local LibDem representative called a few days ago.  He looked like he could do with a good wash and needed a comb through his hair and all I have had from the local Conservative representative is a glossy leaflet which was a blatant plug for his local letting agency.  Hhhmmm.

21.04.10 - EDITED TO ADD:
I noticed a link on my traffic feed (see the sidebar) that showed a visitor had dropped by the blog via "Jack Straw's Soapbox" so I had to have a nosy to see how this linked in with that (other than for obvious reasons).  It seems that the "blah blah blah" guy has tracked me down.  So please all say hello to Mr. Mark Davies, official bag carrier during the General Election Campaign.

22.04.10 - EDITED TO ADD (AGAIN):
An email has arrived from Katie Haworth, assistant to Jack Straw.  She has asked for permission to link my blog to the Blackburn Labour website... so, a big "HELLO" to any new readers and I hope that my blog  will hold your interest after the General Election.  There is a little bit of background information about me on this page.
Related Links:
http://www.guardian.co.uk/politics/constituency/728/blackburn
http://www2.labour.org.uk/jack-straw
http://www2.labour.org.uk/sarah
http://wordpress.blackburnlabour.org
election social networking twitter