Very Kreativ - Seven Things You Didn't Know About Me 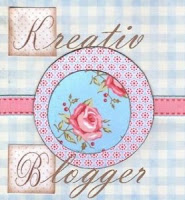 The lovely Rosie Scribble has awarded me the "Kreativ Blogger" award.  I have a feeling hope that this means that my blogs are creative in the 'process involving the generation of new ideas or concepts' sense rather than the "OH MY GOD, SHE'S SUCH A LIAR" type of 'creative'...


Anyway - to be eligible for this award, I have to disclose seven facts about me that you don't already know (don't worry, I haven't had dinner or drinks with a Gladiator).  Prepare to be shocked and amazed, although I'm expecting a few people to recoil in horror.  This calm, sensitive exterior is all a façade, you know?

Now I have to pass this award onto seven other bloggers who will I think are deserving of this challenge:
Sarah at Bliss Bubbley
Gary at Blog Up North
Nikkii at Clinically Fed Up
Manda at Flying Start Magazine
Paula at Battling On
Victoria at It's A Small World After All
Hannah at Muddling Along