"ADHD *may* not be down to bad parenting" say the scientists! 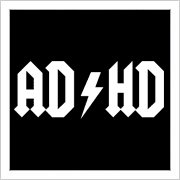 Except that I have never used ADHD as an excuse for my son's behaviour. Here is an article about a group of scientists from Cardiff who have now discovered that there is a genetic link to attention-deficit hyperactivity disorder (ADHD) and that the disorder is a brain problem.  Oh *yawn*. Tell me something I don't know. We were given that snippet of 'useful' information about seven years ago.

I have never considered my son's ADHD to be part of 'bad parenting' and I get really annoyed when so-called experts decide that the chemical imbalance in my son's brain is down to me not being bothered to raise him correctly.

I have written before about how my son explained his ADHD.  Here is an excerpt from that blog post:

So, experts - tell me how the fuck that is to do with bad parenting?  I tell you what, let pick apart this 'new' discovery and the statistics that go with it:

The researchers compared genetic samples from ADHD children with DNA from 1,047 people without the condition.

They found that 15% of the ADHD group had large and rare variation in their DNA - compared with 7% in the control group.

Big fat fucking WOW! An 8% difference!  This isn't going to dispel any myths and discourse from the people who are already so judgemental about this condition.  Since my son was a few weeks old I knew that something was 'different' about him - I was already a mother to two children and instinctive tells you when something is 'not quite right'.  I doubted myself so much at the time that I enrolled on a couple of parenting courses but ended up teaching the tutors a few tricks of the trade.  That says it all really!

If you think we had him diagnosed with ADHD so that we could get extra help and money, let me tell you that, apart from a slight dalliance with Ritalin, we have controlled his ADHD through diet, exercise, praise and positive parenting.  We don't receive one single penny in extra assistance.  Any parent who has a child with ADHD will support me in the view that no-one wishes any kind of disability on their child and for public commentators and speculators to say as such saddens me.

Charities and scientists have every right to be excited about this new connection with genetics but it doesn't really help the parents that live every day of their lives being judged, whispered about and effectively being told that they are jumping on some kind of bandwagon.

*this blog post was edited about eight times to take out most of the anger and the swearing.  This is the best draft you're going to get!