Be Good To Your Daughters 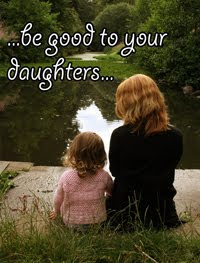 This post stems from an invitation from Kate at The Five F's to join a meme originally started by Garry from Him Up North.  The meme is based on the lyrics of a John Mayer song called 'Daughters', Garry's lack of experience of raising daughters and the theory that the future of the world rests on the female population (like we haven't got enough to worry about already!).


So he asks three questions to embrace the subject:

If you are a daughter, what did you learn from your father or mother?  Positive and negative.

I was brought up in a traditional, stereotypical 1970's/1980's family.  Dad went to work, mum stayed at home and was a dutiful mother and housewife.  The chequebook was balanced each month, the bank statement was scrutinised, my mum was given an 'allowance' and 'housekeeping' money and I was protected from the real horrors of the world.  We had no debt (other than the mortgage) and it was instilled into me at a very early age that work produces money which keeps the roof over your head and food on the table.  Also, if you were lucky there was enough money left over for treats and holidays.  If rankings existed, I'd say we were "upper working class".  We lived in a nice area, close to extended family.

Dad worked diligently at what ever job he had and considered company loyalty first and foremost.  Apart from a break of seven years to work on a once-in-a-lifetime engineering project, he stayed with the same company from his apprenticeship at the age of fifteen right through until when he was offered early retirement. Mum suffered from Bronchiectasis all her life so the role of homemaker suited her down to the ground.  She worked hard at making a comfortable living environment for us all, always completing the household jobs herself, only asking for help if she really couldn't do something.

I was the eldest child and always felt that there was a lot of pressure on me to be successful after being told at an early age that I was above-average in the clever stakes.  Also, because of barriers put up between adult and child, I always found it very difficult to talk to my parents about personal battles.  They very much disapproved of my wild-child streak (very mild compared to a lot of people I know) and were extremely disappointed when I found out I was pregnant with my first child... and my second... and my third for that matter.  Not once was I ever congratulated on a pregnancy, even though I had been with the same partner since I was 18 years old and we were married.

I've also recently found out that my childhood was shrouded in secrecy and lies, probably to protect me but, for that, I now have a fractured relationship with my father and I have never had a chance to talk to my mother about it as she died at age 55.

If you have daughters, what lessons have you passed/will you pass onto them?

I hope that I have taught my daughter that it is OK to fail and learn from that experience.  I want her to know that she can always talk to me about anything and that, at the end of the day, this is HER life and it is up to her to fight her own corner - but she has us cheering her on and supporting her in each of her battles.  I also hope I have passed on family values.  We were both teenage parents and we both know how hard that is, even with all the support in the world.  When she got her first house and started buying furniture for it, she sat in our lounge, looked around and said,


"I hope I live in a house like this one day.  It's really homely."

There... right there is my success.

Do you see something in yourself which you recognise as an inherent (unlearned) trait from your parents?

The matriarchal figures in my family (on both sides) have always been strong women who have been the main leaders in the family.  I know for a fact that is inbred in me.  I occasionally hear the disapproving tone in my voice when advising my daughter how to deal with a situation.  It's not meant to sound like that - more "I've been there, done that and bought the t-shirt" but then I remember I have to take a step back and let her experience her own life.  Maybe I misinterpreted my own mother's 'tone' because she didn't have an unkind bone in her body.  The patriarchal figures have always been workers and providers.  I often wonder if that is why I am so determined to make my own role-swap situation a continued success.


This song is for my daughter.  Just because.

If anyone else would like to pick up the meme then please feel free to do so - usual rules: link to the original meme and also back to me.  Let me know when you've completed it so I can have a read.
daughters family fathers meme mothers parent blogging parenting